Snuggle up and take a little ‘me’ time this Winter

It might be colder at this time of year but that gives us all the excuse to tap into the snuggle factor and enjoy some ‘me’ time. Everyone has their favourite way of doing this, but we thought we’d share ours and hopefully add some ideas into the mix!

Turn down the lighting and add some gorgeous scented candles. There are loads of different kinds available but good Winter scents include cinnamon, sandalwood, vanilla, pine, frankincense and apple. All these scents work well together so you can mix and match for a fantastic scentsation!  You could also put on your creative hat and create some homemade Potpourri with pine cones, cinnamon sticks, star anise and dried orange slices. You can purchase the latter in a craft store or make your own. Slice up two or three oranges into thin rounds about 1/4 inch thick. Blot with kitchen paper and put the slices on racks in your oven on a low temperature, for about 3 hours, to dry out. Remember to check on them regularly to ensure they don’t burn! You could also thread these on string with cinnamon sticks and bay leaves and hang up.

It takes a lot to beat a hot toddy or soothing spiced fruit juice – you don’t need to have a cold as an excuse to mix one up!  Here are a few suggestions; some with alcohol, some without, but obviously everything in moderation!

So, your fire is lit, your sitting rooms smells heavenly and you’ve got your winter warmer to hand. Your favourite TV series is about to start or you’re planning a box set binge – or even just relaxing to your favourite music. Now’s the time to snuggle up on the sofa, under your duvet, with your other half, or your four-footed best friend. If you’ve never tried a wool duvet, we can say, with confidence, that they provide snuggle factor in spades! We individually handcraft each of our certified 100% British wool duvets in our Devon workshops. We only ever use 100% British wool, which goes to British mills to be cleaned without using chemicals or bleach and then needled to create a soft cloud-like layer that is hand stitched between gorgeously soft 260 thread count cotton. The result is a light duvet with a fantastic drape, that will wrap you in comfort from head to toe.

Sleep researchers tell us that in order for our bodies to tip into sleep, our body temperature needs to drop slightly. So, the last thing on your ‘me’ time list - about an hour or so before finally tucking yourself into bed - could be a nice warm bath, in soothing scented bubbles. The bath will slightly raise your body temperature, but then your body will cool down as you slip underneath your duvet, creating the right temperature to help you fall asleep. This is when our certified 100% British wool duvets really come into their own. Wool is naturally breathable and so is temperature regulating; adjusting to your body temperature throughout the night and enabling a more restful sleep. Bliss.

We’re very proud to be the first bedding company in the UK to be awarded certification from British Wool. Only companies that can prove that they use 100% British wool are given this accreditation and allowed to use the 100% British Wool mark. 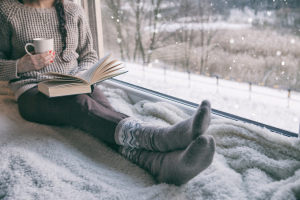 This Christmas, Give Yourself the Gift of a Little “Me Time” 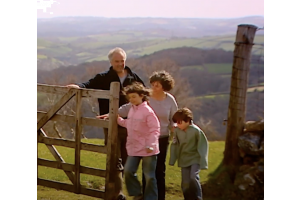 The Story of Devon Duvets is back on TV 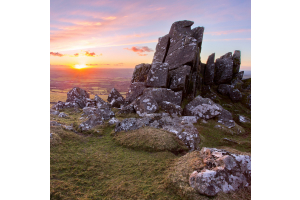 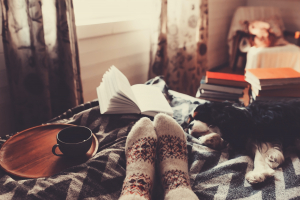 Double up on a Cosy Night’s Sleep this Winter 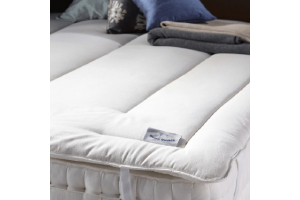